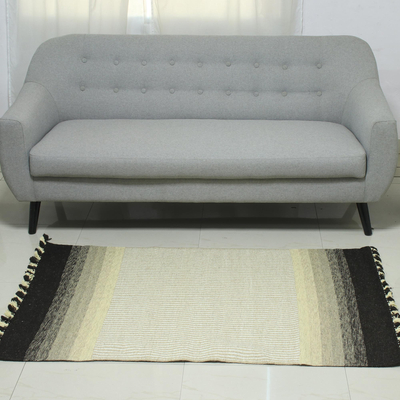 Presented by the Artisans Alliance Jawaja Weavers Division (AAJWD) of India, this area rug makes for a classic addition to any home. Local artisans hand-weave the rug of wool, elaborating it with beige and white stripes between black borders. Petite fringe work at the ends complete the rug.

"The most beautiful carpet in my house!"

Thank you for the beautiful carpet you created. It is a very nice addition to our house.

"Another great rug for my collection!!"

Very happy with my purchase - colors are even better than what is shown online and the workmanship is excellent.

This a handsome, small rug. Looks very nice in a small hallway in my apartment. Three colors: black, cream colored, and and wine colored.

You can find our wool area rug 'Classic Charm' (3x5) by AAJWD in area rugs categories such as Hand Woven Area Rugs, Wool Area Rugs and Solids and Handloom Area Rugs. Enjoy exploring these sections for other Novica treasures.

"I have been with this organization for more than 25 years and, over this period of time, we have been able to teach a lot of artisans and help them become economically independent."

The Artisans Alliance Jawaja Weavers Division (AAJWD) was formed in 1976 by Prof Ravi, of the Indian Institute of Management, Ahmedabad in association with national Institute of Designing. Omkar Lal, President of AAJWD shares his organization's hope and aspiration.

"Prof Ravi came to our small district in Rajasthan for research as part of his studies. He interacted with many dhurrie artisans here and saw its promise. Students from National Institute of Designing would visit to give us ideas and guide us in design.

"Along with two artisans, Ravi formed this organization. Jawaja is a block in the district of Ajmer and consists of many small clusters. Ravi helped us for two years until we could manage on our own. Today, 18 more artisans have joined us.

"I joined the group three years after it was formed. By that time there were already 30 people in total and slowly it became 50. Here in our division, we teach people who want to learn weaving. Every six months, we recruit new members. Once they master the art, we leave it up to them to get started on their own or become a member if they wish. I have been with this organization for more than 25 years and, over this period of time, we have been able to teach a lot of artisans and help them become economically independent.

"I come from a family that weaves stoles and shawls. I learned the art of weaving dhurries only after I joined this organization. It is a great feeling to be part of Novica."
View all