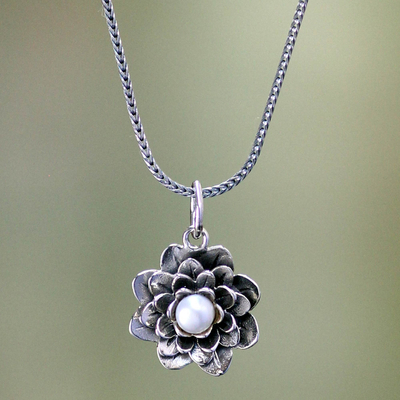 Prized for its purity, the lotus lives in muddy water yet is untouchably... more

Prized for its purity, the lotus lives in muddy water yet is untouchably wholesome and clean, thus it reflects the highest expression of beauty. Nyoman Rena creates the pristine flower in sterling silver, centered by a lustrous pearl, which represents June´s birthstone. The elegant pendant hangs from a sleek silver cord.

Nyoman Rena has received 6 microcredit loans with 0% interest from Kiva and Novica, the first for $2500 and the most recent for $2850. Proceeds were used to invest in the purchase of sterling silver and natural gemstones, to use in producing jewelry.

Purchased to match with lotus earring...really like it a lot!

Absolutely love this beautiful necklace. It is beautifully made and I am very happy with this purchase.

I really have enjoyed having this necklace, along with the matching earrings. I normally switch up my jewelry frequently, but this set is fast becoming a go to. The whole set is well made, and simple and elegant enough to wear with many things. One of the best purchases I have made on Novica.

"Elegant, simple and so so beautiful!"

I bought it together with the earrings and from the moment I opened the box I fell in love with it. It is so well crafted the petals of the lotus ... everything !!! It looks so much better in real life. Its a great product. Big thank to a designer, very well made, very beautiful.

Love it, Beautiful and well made.

The sacred lotus pendant is beautiful, but it is very very small. Of course the dimensions were listed, but I am not the smartest when it comes to centimeters. The pendent was approx 1/4 inch round. Too small. The workmanship was very good, and it is a beautiful piece of jewelry, but due to its delicacy it has no visual impact. I was hoping the pendent would be 1/2 - 1 inch round -- that would make a stunning piece of jewelry. Unfortunately I will be returning this item. I do not believe that it is worth the price.

Very attractive necklace but much smaller than what it looked like in the picture. Thought it would be a bit bigger.

I love this company and appreciate the talents of the unique and creative artists. I am a frequent and loyal customer.

Simply beautiful design and quality craftsmanship. I wear this more than any other necklace. It goes with everything and Ive gotten many compliments on it over the years.

"After 16 years with Novica, my goal now is to create nice new collections of jewelry that will sell well."

"After learning to craft silver jewelry, I borrowed capital from my parents to start my own silver business. Things were not as easy as I thought they would be, but now I have overcome so many problems and difficulties with the help of my parents and God. I think we have to live in a simple way and always save for our future life if we want to succeed.

"My business grew better and more stable when I was 25. I had the help of 15 workers, and that helped my business. Unfortunately, a client who usually placed orders with me suddenly went bankrupt, and I had to reduce my workers to 12 people.

“When I was 30, I married a beautiful woman and now we have been blessed with a son and a daughter. Having children gave me more motivation to boost my business, by considering my children's’ future. I always give thanks to God, because after having children there was somehow always extra income to be found. I expect that my children can continue this business someday. For now, only my wife is willing to help me in this business.

"My work concept is to allocate the income from the sales to fund the business so it can become bigger and better over time. I work with the help of 12 workers now; 3 women and 9 men. I manage them according their main skills and talents. We work with manual tools like other Balinese artisans, such as hammers, stoves, chisels, etc.

"Two years after I married, I joined Novica so I could sell my jewelry worldwide and have more people see my designs. After four years of working with Novica, I could rent a shop to display my jewelry at a tourist area in Ubud. The profit I got from selling my jewelry increased by around 50% after joining Novica. This helped to boost my business development, and my little family could also buy a car and even do some home improvements.

“After 16 years with Novica, my goal now is to create nice new collections of jewelry that will sell well. It's a great challenge for me to create designs that Novica will approve, and that of course will make the customers satisfied with the quality of my work. Usually the inspiration for my designs is from my imagination, combined with the current trends.”

Rena was born on October 11 as the third of five children. His father is Made Beratha and his mother is Ketut Sukarti. Young Rena started to learn wood carving when he was in the third year of elementary school. His grandfather, an architect of traditional Balinese buildings who is also a senior carver, gave much support to Rena's carving and jewelry development.

After graduating from elementary school in 1983, Rena was introduced to a famous silversmith in his village by his father. Since then, Rena began learning to craft silver jewelry on Sundays. Making use of his carving ability, Rena combines it with his silver work. He believes that one day his silver crafting will invite the interest of customers worldwide.

I love your work, well crafted and imaginative!

The black onyx stone is big and beautiful. The scroll work stands out framing the stone creating a feel of lux. By far my favorite ring. Wear it with anything!

Every NOVICA product purchased through the end of the year qualifies you to win a trip for two on our new Classic Peru Adventure Tour to Machu Picchu & Ancient Inca Sites. Details here. Let the journey begin!
NOVICA Journeys