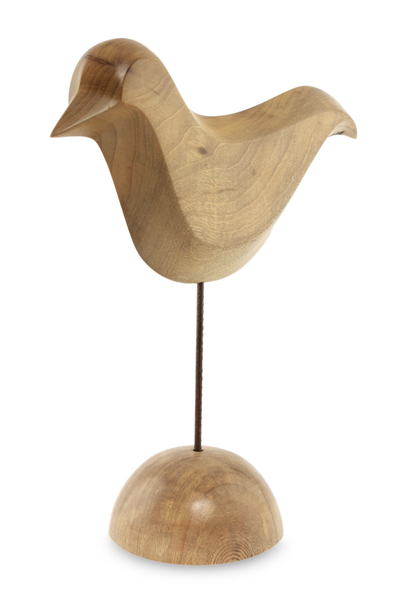 Sleek, soaring line defines a bird of grace and elegance, revealing the textures of the Brazilian forest. Urubatan carves a dove by hand of imbuia wood to represent peace. The signature sculpture is poised on an iron rod.

This is part of a numbered limited edition of only 10 pieces.

You can find our wood sculpture 'Dove of Peace' by Urubatan in sculpture categories such as Animal Themed Sculpture, Shabby Chic Sculpture and Wood Sculpture. Enjoy exploring these sections for other Novica treasures.

Urubatan has received a $600 microcredit loan with 0% interest.

"In my work it is common to find a representation of all those who reign in nature. I mix the rational, with the animal, with the vegetal."

"Art is feeling. It is very difficult for one person to completely understand the feeling of another. That which drives the experience of liking or not liking a work of art is exactly that movement of emotions. Nobody is capable of comprehending a work, nor its artist. Art is meant to be felt, and therein lies its capacity to save lives. After finishing a sculpture I often ask myself where the forms came from, and I think it is a craft of innate spiritual creativity; it is funny to realize what the spirit can do with our own hands.

"I was born in a state of the eastern Amazon, but I moved when I was still a boy, when my father came to seek medical treatment for his vesicular pain. He was disillusioned by all the doctors he consulted. Arriving here they discovered that it wasn't terminal cancer, as others had believed, but rather an illness that could be cured with simple surgery. This episode finished with us moving to the region.

"I discovered a great ability for design, and later was encouraged by my teachers to try out sculpture, as my forms seemed to jump from the paper. It was the encouragement of friends and teachers that led me to exhibitions, and they gave me materials and tools so that I could develop my passion for sculpture. I began by utilizing materials found in nature and recycled pieces, like demolition wood. I've never liked to contribute to the destruction of the planet. Art must be beautiful in all of its senses.

"The ecological question is always present in some form in my work. I think that we all must do our part. In my work it is common to find a representation of all those who reign in nature. I mix the rational, with the animal, with the vegetal. For nature, everything has the same value, and no species is more important than any other.

"It is in our dreams that I seek inspiration, they reveal much about ourselves. Due to their oneiric compositions, my sculptures tend to be labeled as surrealist, although I am self-taught and don't belong to any artistic school. I don't think art is in the conscious mind. Art is not from the consciousness, but rather a conditional moment of the spirit.

"I know how to make an infinite number of forms, but to sell and set prices is terrible. The florist sells roses because he was born for that; ask him how much it values, and certainly he won't know the response. The same thing happens with artists. We make art because we are born to do it. I think that Novica allows for artists to make what they need to make and to exhibit their product inside people's homes. To allow for this access is very important, and undoubtedly in is a revolution in the art market."