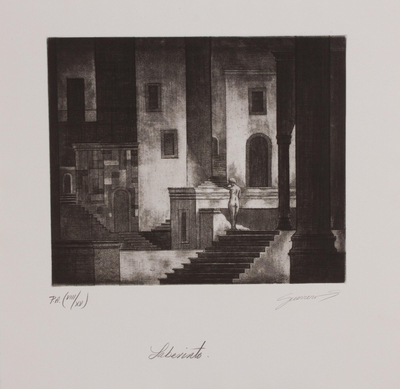 byFrancisco, Patricia and Gilberto:
A labyrinth of the mind, this composition depicts a series of architectural... more

A labyrinth of the mind, this composition depicts a series of architectural structures in bizarre and uncanny configurations. Mexican artist trio Francisco, Patricia, and Gilberto create this composition in the tradition of printmaking as they capture the surrealist scene in black and white. This print is achieved through a meticulous process where a metal plate is first etched with the image before being applied to paper with ink. Part of a limited edition, the print arrives within a paper mat.

You can find our 'labyrinth' by Francisco, Patricia and Gilberto in paintings categories such as Architectural Paintings, Surrealist Paintings and Print Paintings. Enjoy exploring these sections for other Novica treasures.

"One of our goals is to establish a museum to preserve the centenary legacy of Gerónimo de León's exvotos...."

"Hello! How are you? We're a group of artists who got together after seeing the need to form a team to promote new Mexican artists. Apart from publishing art books, we specialize in limited editions of graphic works; we have workshops for both engraving and lithography.

"I'm Francisco Baños. I'm an editor and founder of the group, and I coordinate the works and research. My wife Patricia Quintana is a talented painter and she is responsible for quality control in our works. Gilberto is also a painter, and he looks after the graphic editions. Along with Patricia and Gilberto, we work with other artists, selected according to the specialty required by each theme.

"Briefly, over the past decade, we have created the following series with shared patronage:
From a Selection of Mexican Art
Landscapes and Scenes of Discovery
Mexico from the Pen of Don Artemio
Scenes of Mexico

These were a commercial success, very well received in the cultural and artistic world by critics and by the public in general. Some of our patrons from the business world include 3M, Fujifilm, Sony, Siemens, American Express, Roche, Comex, AT&T, Iberia, Holcin and Apasco.

"Our exclusive works, Florilegio Médico Mexicano and Gerónimo de León, Painter of Miracles broke records in the publication of art books and engravings, in attendance at the exhibitions and in testimonials.

"We have shown our work in Mexico City's prestigious Franz Mayer Museum (1991, 1992, 1994 and 1996), the Museum of the Basilica of Guadalupe (1997). The Monterrey Museum of Modern Art (1999) and Guadalajara's Centro Cultural Hospicio Cabañas (1999) among other respected venues. We have been awarded the Premio Nacional de las Artes Gráficas for Florilegio Médico Mexicano (1994) and Gerónimo de León, Painter of Miracles (1996).

"One of our goals is to establish a museum to preserve the centenary legacy of Gerónimo de León's exvotos, while we hope to bring out special editions on historical and artistic developments, celebrations and anniversaries, and even produce murals, for example, in industrial plants.

"Outside Mexico, we have entrusted Novica with our works, and have created a special series for Novica. All our prints come with a certificate of authenticity, and are signed by the artist and print maker. They include a brief description of the engraving and the artist."
View all