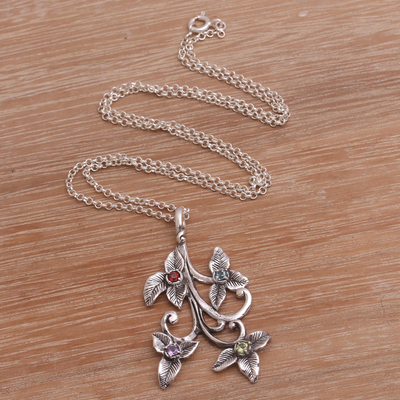 (30)
Inspired by his love of nature, artisan Giri Tasmana creates this stunning... more

Inspired by his love of nature, artisan Giri Tasmana creates this stunning pendant necklace that adds a feminine accent to any look. Handcrafted from sterling silver, the pendant features a bouquet of flowers adorned with round faceted garnet, blue topaz, amethyst, and peridot gemstones that sparkle from within prong settings. The name kembang setaman is a Javanese word for flowers that are seen at traditional wedding ceremonies.

Nice work, gems a little to small....bracelet aLot to small, put back for granddaughter?s birthday in three years,,,,her birthstone

absolutely stunning. got this for our friend who is grocery shopping for us during this pandemic, as a thank you gift. shes going to love it!

Love folk lore around owls and always wanted to have pieces related to them. I simply Adore the art work put into them and they remind me of so many stories. Fun to wear, easy on the ears, and receive so many compliments.

This is so detailed. The work is flawless. Such a pleasure to wear. I would purchase this item again! The fit is also perfect.

This reminds me of Danish jewelry , simple yet complex.The workmanship is exceptional, The stones are perfectly mounted.

If you are enchanted wearing unique bracelets, this one is for you. It is different and draws your attention to the tiny gemstones. I love it.

This artist shows a lot of talent or potential and is in their late teens or twenties.

"Indonesia is rich in flora and fauna species and these inspire my designs."

"I was born in 1995 in a Balinese town where most of people work with silver. Workshops abound, as do shops selling our beautiful silver arts.

"I'm the older of two children and my father is Komang Suartra, a Novica-featured artisan. I want to continue my father's silver artistry, but I have a different concept and use themes in my designs. They tend to depict the floral and animal motifs that I love and want to preserve.

"My father began teaching me when I was in sixth grade. I began with the repoussé technique for embossing silver. A year later, I began making jewelry to sell to my classmates. I continued doing this until I graduated from the university, and now I'm setting up my own silver workshop.

"Indonesia is rich in flora and fauna species and these inspire my designs. I want to preserve their existence and also want to introduce them to others.

"I work with the help of three silversmiths who help me to craft my designs. In addition to sterling silver, I use cultured pearls, carved bone and gemstones, and work with semi-traditional tools, including a stove and polishing machine, solders, tongs and more."
View all