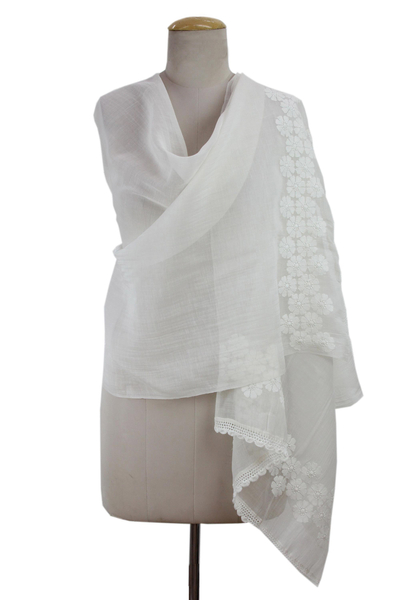 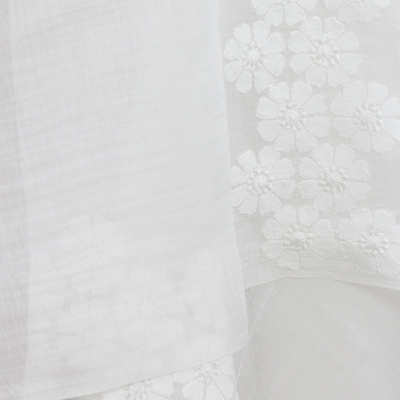 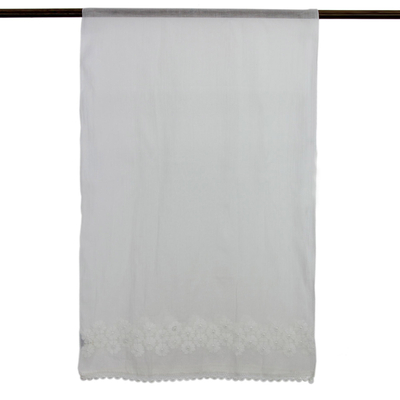 Uma Tripathi works in ivory on ivory to create floral bouquets on a delightful shawl. Beautifully feminine, this lightweight wrap showcases India's chikankari embroidery. Block prints create the patterns, which are embroidered by hand, and crochet lace embellishes the borders.

This is a beautiful color of red/crimson. It looks like the picture on your website. It is gorgeously made, detail, etc. it also is soft and drapes well. This is my fifth scarf by this craftsperson ?

This scarf is a lovely cream color. It is soft and drapes very nicely which I really like and find easy to wear. Thank so much.

"It will be a beautiful addition to my Moms attire"

Chikan Flowers in Indigo, Cotton and Silk Shawl in Champagne and Indigo from India

This shawl is not only has a gorgeous, but the design in general is lovely. I love the embroidered edges, and the embroidered ferns on the shawl. It is soft and not too heavy and falls nicely.It is exactly what I had been looking for an unable to find. Suitable for Western wear or as a dupatta with Indian clothes. Thanks so much.

This shawl is absolutely beautiful. The fabric and weight is perfect for a summer shawl the design and added silver bits AND lovely crocheted edging is so lovely. Thank you so much. I love this shawl.

"Will wear it happily"

You can find our cotton and silk shawl 'Ivory Garland' by Uma Tripathi in accessories categories such as Floral Shawls, Silk Blend Shawls, Silk Shawls, Cotton Blend Shawls and Cotton Shawls. Enjoy exploring these sections for other Novica treasures.

Revered since the time of the Mughal emperors, chikankari is a unique style of Indian embroidery with 32 variations. It demands great skill and patience. Uma learned this art from her mother and today she teaches chikankari embroidery to her helpers, who in turn often teach it to their daughters.

Uma has a workshop that provides full-time jobs for several women. She also works with women artisans in neighboring villages. They work from home, enabling them to care for their children and families.

Deeply committed to women's empowerment, Uma helps to provide for the education of her four nieces.

"I want to create a workplace that allows women to stand on their own feet without compromising their duties toward their families. I want to work on women's empowerment."

"I was born and brought up in Bhilainagar, in Bihar, before receiving a degree in law from Lucknow University. Lucknow was my family's hometown but they shifted to Bhilainagar because of my father's job. When we lost him in the mid 1990s, we decided to move back to Lucknow.

"The city's design was heavily influenced by several emperors and incorporates significant imperial areas that have earned Lucknow the title 'City of Nawabs.' It is also known as the Golden City of India, Shiraz-i-Hind and the Constantinople of the East. Lucknow's society is famous for its etiquette and traditions that attain a rare degree of sophistication. Be it the cultural charm or the monumental beauty, all are well conserved here to make this 'the city of many splendors.' Lucknow's culture, traditions and crafts have always been a part of us and returning there was a welcome change.

"My interest in design dates way back to my school days. In high school, I opted for home science where we did a lot of artwork like embroidery and other crafts. I was pretty good at it. I always liked designing.

"Living here has given me the opportunity to explore the majestic embroidery work known as chikankari, which symbolizes Lucknow's heritage and culture. Mastering this craft wasn't easy. I learned by going to different villages and later on I improvised on it by merging traditional designs with modern ones. My learning experience brought me in contact with different artisans and their special techniques, and I am now skilled to impart this traditional knowledge to others.

"Along with my brother, I started working with a handful of women artisans. My brother is my driving force — he takes care of the administrative tasks. It was a very humble start, but slowly our effort expanded until today we have 45 full time workers collaborating with us and more than 150 women artisans from the nearby villages, whom we hire as our work demands. Starting was a big challenge at first but later, when things began to fall into place, it became a most worthwhile experience.

"I want to expand my workshop. I want to create a workplace that allows women to stand on their own feet without compromising their duties toward their families. I want to work on women's empowerment.

"I get my inspiration from the hard work, dedication and expertise of different artisans and also from my surroundings. So far, we have given jobs to talented women and it gives me great satisfaction to see that I am able to help them, especially those who can easily work from home."
View all