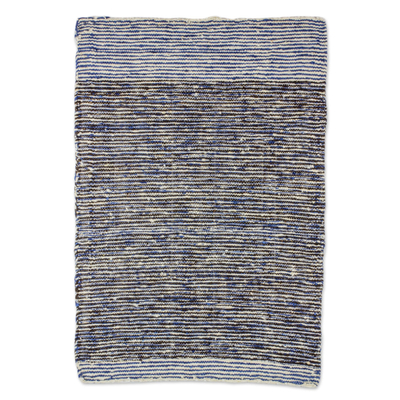 (17)
Momosteco Weavers are a cooperative of indigenous workers from Guatemala who use... more

Momosteco Weavers are a cooperative of indigenous workers from Guatemala who use their combined efforts in order to preserve the time-honored traditions of wool weaving that have been passed down through their families since the days of the Spanish Conquest. They proudly present this area rug, handwoven from wool through a process that takes between two and three weeks to complete. Inspired by their ancestors, the artisans weave threads colored in ivory, midnight, and black for a textured, stippled appearance in grey and blue.

the rug is thick and even smells good. Love the bold colors.

The colors of this rug are indescribably vivid, rich, and beautiful. I would like to have several of these rugs, scattered around my house like rose petals! Simply gorgeous. Yes, it would make a fabulous wall-hanging, but I do have mine in a small guest bathroom and its stunning. Truly great craftsmanship and well worth the price.

Very beautiful style, but not very durable, and the weaving is loose. prone to moth damage, unfortunately. I use it outdoors to protect other wool items from moth damage. I love the colors, though!

It is not grey. It is a dark charcoal or a medium brown. Or I was sent the wrong color choice. I saw they no longer have the item I THOUGHT I was getting in the size I need so maybe they just substituted brown, which is/was an option for the grey I ordered. I have grey wood floors and this rug is brown. It is also extremely thin. Its a stretch to call it a rug it is so thin. I have been shopping Novica for years but lately have had a few issues. I dont think I will be ordering from Novica in the future as I also bought a dress recently I just loved. Unfortunately it fell apart after the second wearing.

This woven rug is a room changer. I totally love it! Its well made and durable as well as bright and happy!

"Ill keep for ever"

Momosteco Weavers has received a $300 microcredit loan with 0% interest.

"Just as I learned to weave from my parents, I am teaching the art to my children and grandchildren. I teach anyone who wants to learn, because I don't want our weaving techniques to be lost."

Formed on April 26, 1989, the Momosteco Weavers cooperative resulted from the dream of 78 artisans. They wanted their traditional skills of weaving wool to be recognized. Their idea was that by promoting the development of each artisan, they would also be promoting the development of their families through a better income. Therefore, the group joined forces to commercialize their weavings. At the same time, they offer members training and technical assistance.

Today, the cooperative has 115 members, of which 12 are women. One of the group's most important functions is to facilitate access to credit, so that members can purchase materials and be able to work continually.

Most members have been weaving for a very long time. They learned at an early age from their parents, as the weaving tradition is passed down from generation to generation. Weaving on handlooms with foot pedals was once considered men's work, but today women also have the opportunity to learn this craft technique.

The creating process begins by carding, or brushing the fleece to clean and untangle the fibers. Then, the yarn is spun and dyed before weaving. Each person in the family has a well defined task. For example, carding is usually done by grandparents, women, and young people who help out after school. Spinning, dying and weaving are usually done by the men.

"I began learning to weave when I was eight," says Silvestre Coxaj Vicente, a member of the coop. "My father taught me. His parents were weavers and, together with my brothers, they introduced me to this art. When I was a little boy, weaving was the only economic activity that could be done in my village. With our weavings, we were able to earn money for our daily expenses. But we inherited this art from our ancestors – it's in our blood – and we hand it down from generation to generation.

"I remember my first weaving very well – it was a blanket. I wasn't able to make it entirely by myself. I needed my father's help more times than I'd like to admit," he says with a laugh. "When I finished it, my mother took it to the market to sell, as our work meant income for the family. It was so satisfying to learn that she had sold it right away. Those days were long ago. I've been weaving since 1964 and, through a lot of hard work, I've been able to have my own workshop.

"If my friends were to describe me, well, they'd say I'm a good artist with a gift for weaving, and I've been able to set up my own workshop through effort and quality work. But I still dream about innovating new designs and becoming known as one of the best weavers in my hometown.

"Just as I learned to weave from my parents, I am teaching the art to my children and grandchildren. In fact, I teach anyone who wants to learn, because I don't want our weaving techniques to be lost. They are very representative of our region.

"What I enjoy most about my work is designing new rugs and other items, and I like the process itself of weaving. No matter how many times I've done it, weaving always brings a new challenge.

"One day like this, a normal day some years ago, I was about to shrink the fabric when I slipped and fell into the pot of hot water! Fortunately, it wasn't hot enough to burn me but it scared me, and I got some bumps and bruises from the fall. Everyone there was really worried, but when they saw I was alright, they had a good laugh."
View all