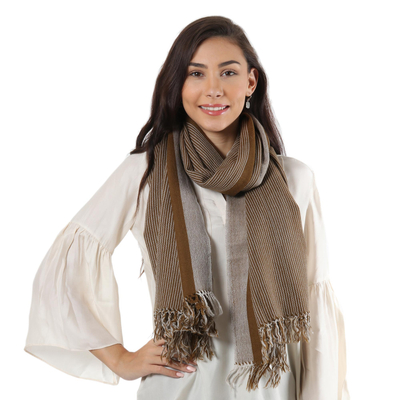 (17)
This 100% wool shawl is handwoven by the Karmabhoomi artisans of India, using... more

This 100% wool shawl is handwoven by the Karmabhoomi artisans of India, using locally sourced wool from the Ladakh community in which the artisans work. The main panel is woven with subtle brown and ivory stripes, creating a soft camel brown color from a distance. Bands of brown and ivory border each long edge. The ends are finished with fringe.

Whenever I wear this, I receive a lot of compliments!

the subtle floral texture is so subtle...the color is a valuable addition to my stable of scarves. the fabric is a perfect light mesh of precious fibers. yum!

"A lovely addition to my collection."

"My favorite shawl. I just purchased a second one."

This is the first Ladakh Highlands shawl that I purchased and I love it. I use it constantly, at home, traveling, you name it. I just purchased a second one so I will have a new one if this one ever wears out. It is whisper thin but so soft and warm. I highly recommend all Novica products but this one is a special favorite of mine

I am delighted with my exquisite gift to myself. The color is vibrant and beautiful. The quality is tops and the fabric is soft & light. I can even feel the love that went into it. Wrap yourself in this elegant shawl. Youll be glad you did.

"i will carry it every where"

i am so thrill, happy and hope soon i can wear it, its so beautiful, i am going on a river cruise its just what i wanted and more. i just love the bag it came in it sits in my purse wait for me to ware.

You can find our wool shawl 'Earth Lines' by Karmabhoomi in accessories categories such as Hand Woven Shawls and Wool Shawls. Enjoy exploring these sections for other Novica treasures.

"Karmabhoomi uses Ladakh’s abundant resources to generate incomes for the villagers which will be invested in the local people's education."

"Karmabhoomi focuses on helping Indian villages by teaching skills with available resources to promote self-sufficiency, known as Karm. We aim to teach people and generate employment opportunities in rural communities through education, skills and resources. After traveling across India for months, we found that people in villages are happier compared to people in cities and towns but don't have a sustainable source of income and education.

"Karmabhoomi uses Ladakh's abundant resources to generate incomes for the villagers which will be invested in the local people's education. We provide people with the skills and employment by creating sustainable small scale industries. We want to create products that are nationally and internationally recognized, as well as improving the cultural heritage of India. We are dedicated to creating a sustainable source of income and education in villages to stop the migration of village population.

"The shawls Karmabhoomi produces take several steps. The raw material for our creations are pashmina and sheep’s wool that we obtain once a year from different villages in Changthang block in Ladakh. We get wool from each village with many people pitching in to help. The village head is responsible for collecting because it employs so many people and allows them to earn a living. Then we transport the wool to our plant.

"We process our wool with the help of 13 people and two assistants. Once the wool is processed, it is hand-spun by 52 workers into fiber using charkha and other hand tools. After spinning the wool, our weaving section creates the shawls on 48 handlooms. Then finally, we have the embellishment and ornamentation section to finish the shawls. At each step of creating the shawls, we have supervisors and assistants to assure their quality.

"Ladakh’s location near the border makes it a difficult territory to travel. Ladakh is a tight-knit community that usually doesn't accept outsiders. It took us many years to earn the people's trust and help them understand Karmabhoomi’s aims.

"While starting to work in Ladakh and Kashmir, we faced problems with the secret agencies and local administration. We were so emotionally and financially exhausted that we had to stop working in Ladakh for a time. The initial stages of setting up the venture were so challenging that we felt that we wouldn't be able to survive. We came up against resistance from the local agencies and people against allowing others to prosper.

"Working in Ladakh’s wintry conditions made some of the volunteers and members sick. But all of these challenges only motivated us to keep working towards achieving our goal. Most of this project's expenses were paid from our members' personal savings.

"There were also some frightening moments which are now funny experiences for us. We were shooting a documentary one winter night in Ladakh when the temperature dropped to -30 degree centigrade. While shooting, a light suddenly turned on us and we were ordered to raise our hands in the air or else be shot. After 15 minutes at gunpoint, we were given clearance by the Indian army. We thought that if they kept us in this position for another minute, we would die from the cold. It was a scary moment then, but now we all laugh a lot."
View all