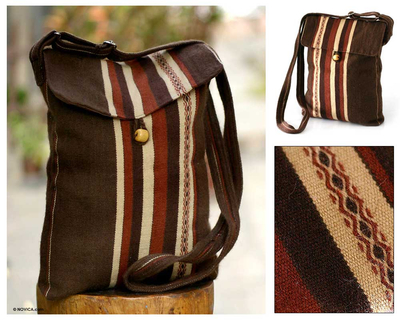 Working with a blend of hand-loomed alpaca wool, the Yurivilca Family crafts a... more

Working with a blend of hand-loomed alpaca wool, the Yurivilca Family crafts a handsome and versatile tote. The handbag closes with a capirona wood button that combines beautifully with the purse's tones of brown, beige and cinnamon. Fully lined, it features two handy inner pockets.

Yurivilca Family has received 3 microcredit loans with 0% interest from Kiva and Novica, the first for $450 and the most recent for $150.

"During my career I've received many awards and prizes, including the designation of Grand Master, but nothing satisfies me more than the love that I receive from my fellow countrymen...."

In his traditional weaving town, the name "Yurivilca" shines brightly, yet it is the name don César Yurivilca that truly resonates - the result of the man's inimitable success in the art of textiles. Don César is currently somewhat of an institution in a town that has made its name on tapestry weaving. This prestige is garnered not only through the success of his tapestries but also because Don César is a pioneer in the field, choosing to take a different path from the traditional techniques and inventing the tapiz relleno. All of the local weavers now follow Don Cesar's technique because they are able to achieve a visual impact with their weavings similar to that which a painter would be able to create with his canvas.

"I've been involved in the field of weaving since I was a child. The influence comes from my family and from my town as well. My parents and my grandparents were weavers and almost everyone in town is involved in this activity. All that I've learned has come from practice, for I've never received any kind of schooling in the art of weaving. I am always seeking to develop new forms and styles for my art. This field gives me great spiritual satisfaction, especially when I am able to teach the new generation of weavers. I hope that I can leave behind an informal schooling tradition whereby people from my hometown can always depend on weaving to make a living. In fact, we've formed a type of community with my children (César, Julio, Grimalda, and Wilfredo) whereby they teach the other young children the skills that I've taught them.

"All of my weaves contain traditional aspects of my town and Peruvian culture in general. I've made tapestries, blankets, rugs, cloaks and even bags, for which I use sheep's wool and cotton (90/10%). For the colors I employ natural as well as industrial dyes. My primary tool is the loom, comprised of a wood shuttle, combs and pegs. The process of my work consists of applying the relleno technique, which means positioning the colored wool between the rows of threads according to the design, and adjusting it with the comb to ensure a compact and precise product.

"During my career I have received many awards and prizes, including the designation of Grand Master, but nothing satisfies me more than the love that I receive from my fellow countrymen - the only thing that will keep me going after I turn 80 years old. I hope that through Novica I am able to meet new friends and to also disseminate the art and culture of my country, Peru."

Don César is a man of modest words and rich dreams. With his provincial simplicity and incredible dignity, he has exhibited his works in Australia and Colombia. He has declined many invitations to exhibit his work because he believes that his place is in Peru, and that the Peruvian who leaves should soon return, for one cannot live much time with their feet in another country.

Hello Yurivilca Family, I received the pink marshmallow coloured woven bag yesterday. The workmanship is lovely and the colour is cheerful and pretty. Please consider making larger bags for practical use.

Dear Yurivilca Family, I have received the blanket you had made - and I can not thank you enough. It is beautiful and makes me think of your hands and hearts you made it with. I feel the warmth of the blanket, but also yours. The packaging was beautiful, starting from the tag, through the paper the invoice was printed on, til mostly the postcard and the small alpaca figure! The package was full of surprises, and made me happy. But, of course the blanket is the most wonderful, and I will always thinking on you when I will use it. So I wish you a long and healthy life with lots of orders, Orsolya, from Hungary.

I bought their ""Green Meadows"" handbag and am thrilled with the excellent craftsmanship and the design of the item. It's of high quality and is durable and beautiful.