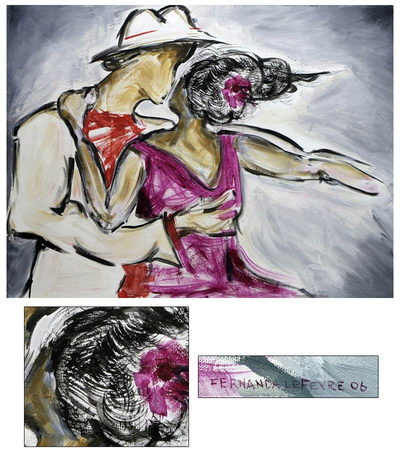 Romance and sensuality exude from the canvas as a couple dances samba in each... more

Romance and sensuality exude from the canvas as a couple dances samba in each other's arms. Fernanda Lefevre captures the energy of their movements as they take the floor of the local gafieria. A dance hall specially designed for samba, gafierias were initially opened at the start of the 20th century, when samba was banned in Brazil. Gafierias became a symbol of marginalization, yet they've always inspired fascination and sensuality. Nowadays gafierias are opened to the general public.

You can find 'samba Dance Hall' by Fernanda Lefevre in paintings categories such as Abstract Paintings, People and Portraits Paintings, Expressionist Paintings and Acrylic Paintings. Enjoy exploring these sections for other Novica treasures.

"I belonged to the 'Impublicáveis' - a group that sought to break with formalism and shorten the distance between art and the public."

"I am a designer and artist, graduated in 1994 from the Pontifícia Catholic University of Rio de Janeiro. In 1989, I entered the Urian Agria Free Studio of Drawing and Painting of Souza, to engage in the creative process proposed by the master. From 1990 to 1992, I belonged to the 'Impublicáveis' - a group that sought to break with formalism and shorten the distance between art and the public. The group organized expositions in such accessible locations as the beach, fairs and pilot projects.

"In 1992 I participated in the collective exhibit '70 Years of Modern Art – Non-Commercial Project' in Rio de Janeiro. In 1993 I began frequenting Tereza Miranda's engraving shop and participated in the 'Students of Tereza Miranda Exhibit' – a collective show of engravings in the Solar Grandjean de Montigny (Rio de Janeiro). In 1995 I was invited to exhibit in the 'Surf Simulator Classes' from the Rio de Janeiro School of Design (Sony Galery, Rio De Janeiro).

"Since 1991, I have practiced, researched and developed an artistic view of capoeira, a popular form of martial arts. To make my work known, I created different tee shirt prints that became popular with capoeiristas. Between 1995 and 1997, I founded a studio and painted decorative and fashion textiles. In 1996 I worked in the Imperatriz Leopoldinense School of Samba. In 1998 I traveled in northeast Brazil, where I taught classes in creativity and visual communication to public schools students on the outskirts of Fortaleza. Since 1999 I have worked as consultant in communication and design graphic lending service."