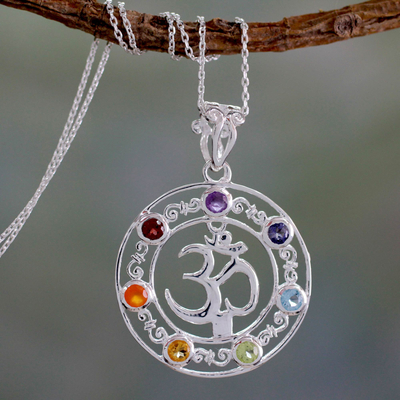 A glistening gemstone halo surrounds the legendary Om symbol in the beautiful... more

This item is available for backorder and will ship within 2 to 4 weeks. Read more

This item is available for pre-order and will ship within 2 to 4 weeks. Read more

From Sanford, Florida, US

I ordered the Om Magificence chakra necklace about four years ago and only take it off to clean and polish it and to this day its still as beautiful as when I received it. The workmanship is truly amazing and the compliments Ive received are countless! I could go on forever about how much I love this necklace!!!

This necklace is smaller than I expected and I am pleasantly pleased because it very delicate and I prefer jewelry that isnt too large. It really is a very pretty necklace. Thank you.

Ill wear it with pride. Thanks!

"My journey into handicrafts has been great, yet the highlight came in 1995, when the Sultan of Brunei placed an order for my designs!"

"Hello, my name is Alok Jain and I was born on December 12, 1971. My family has been involved in the realm of handicrafts for many years now. I was barely 17 years old when I realized I was completely immersed in the creation of handcrafted pieces, including sandalwood and brass items and jewelry, among others.

"Lately, I have been much more involved in the design of jewelry. I'm inspired by nature hence you will find that most of my jewelry items feature natural motifs.

"My journey into handicrafts has been great, yet the highlight came in 1995, when the Sultan of Brunei placed an order for my designs! It was time bound, it took me and my artisan collaborators about two months to complete the order. All in all, it was a really exciting experience to be working all together.

"I always strive to improve designs and quality, and demand for my products has steadily increased. I hope and wish that my association with Novica will bring new opportunities."

This was a gift. It was very nice but the stone did not have quite the depth I expected. Thank you.

love everything I have bought from this artist