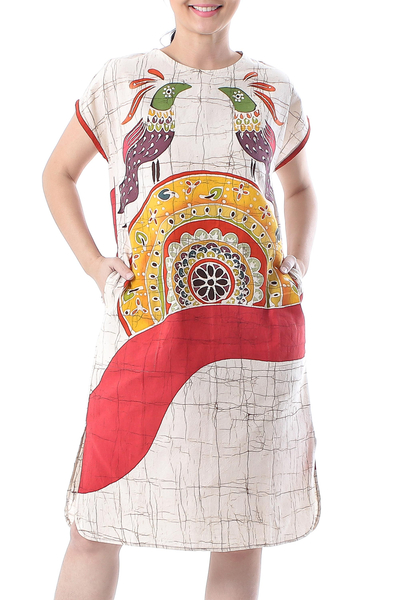 (66)
Find ease and comfort in this hand made 100% cotton batik short-sleeved dress... more

Find ease and comfort in this hand made 100% cotton batik short-sleeved dress from Thai artisan Alaya Cholprasertsuk, who draws inspiration from the scenery around her local village. In warm and cheery earth tones, the dress features two pheasants that greet the day atop a kaleidoscope of color reminiscent of the morning sun. A ribbon of orange swirls around the dress, evoking a sense of movement and freedom. The playful orange band continues to the back of the dress, accented by a cluster of flowers. The dress has two side pockets and a single button key-hole closure in the back.

I?m a lean 5?8?. My dress size is 10 for my broad shoulders and my skirt size is 6 for my narrow hips. I ordered this batik dress in large and it?s a perfect fit for me. I have room in the hips which is needed in order to use the size pockets. I?m so happy with this dress I ordered another one.

"I love This Dress"

The dress is lovely, the fabric is beautiful and it is well made. However, consider how you would like to dress to fit before selecting a size. I am 58 and wear a 6-8 and because the medium was on backorder I ordered the large. I wanted a relaxed fit (like the item is pictured), and the large is perfect. Beautiful work!

I love owls, so this was perfect for me. Washes well with moderate care, without losing colour - excellent!

This piece exudes peace and serenity. I absolutely love the colorful traditional Thai dress, the hair in a bun and the umbrella. The elephants are magnificent. It is amazing to me to see the detail of this piece in batik. It takes me back to my childhood days in Thailand and the making of blissful memories. I absolutely love this piece of art. Thank you!

This piece is vibrant, colorful and personally takes me back to my childhood and the years living in Thailand. Life happens in a market and this is a perfect showcase of it. Thai people always so welcoming, kind and hospitable...Thank you for taking me back in time!

"My new all time favorite!"

This blouse has a very pleasant feel, is well crafted, artfully designed, expertly made and perfect for hot, humid summers! I will buy another one!

You can find our cotton batik dress 'Pheasant Singing' by Alaya Cholprasertsuk in clothing categories such as Animal Themed Dresses, Batik Dresses, Cotton Dresses and Sheath Dresses. Enjoy exploring these sections for other Novica treasures.

Alaya is the mother of an autistic son. She struggles with his angry outbursts and fears. But she is determined to see him grow and find his own place in the world.

Alaya Cholprasertsuk has received a $1800 microcredit loan with 0% interest.

Alaya works with four women who assist in the creation of her textile art.

Alaya provides for the special education of her son, who has autism.

"This craft is my pride and my life and I think I have found my way."

"My parents worked as professors for the university but are now retired. I was brought up with a loving younger brother. I was introduced to arts very early. When I was a child, I had the chance to study drawing and painting with artists. At home I would constantly practice what they taught me. I also used to participate in Siang Dek (Children's Voice), a newspaper whose writers, artistic directors, and journalists are children. It is a free tabloid-size newspaper issued with the famed Ying Yook Mai (Modern Women) newspaper. I had such a good time there that I then set my mind on becoming a journalist. But after graduating from high school, I decided to study architecture and arts media at at King Mongkut's Institute of Technology.

"After graduation I got a job as a designer for an advertising company. Two years later, I worked for another advertising company; I thought it would be more of an interesting job for they worked with all the media: magazines, newspapers, radio, and television. However, after eight years of hard work, I felt like I could not take it anymore. Not only the routine, but everything was exactly the same, our customers ran exactly the same kinds of business and were always asking for exactly the same concept – it sort of dried up my creativity. My husband, whom I met while still working for the first advertising company, left to his hometown in the country in order to work in a ceramic factory. I decided to move and live with him there and this move changed my life greatly.

"We have been living in a small rural village for three years. Here I wanted to do something that I loved and to feel free. One day I got the opportunity to learn the process of batik and kept practicing at home afterwards. I thought it was fantastic because I could create anything on the cloth with a free mind. What I wished to create, well I would just create it! I would go for a walk near my home and look around; I would look at things that impressed my mind and feelings and think about them. Once back home, I would use this inspiration and get down to work with concentration and patience. At first I could not really sell anything until I joined an artistic fair where I used my husband's company stand to display my work on its walls. Unbelievably, I could sell. What really made me happy was to know that people I didn't know bought my work because they loved it, and not only to please me or out of friendship. It encouraged me to continue, which was a good thing since some shops later placed orders.

"I love to design my batik with earth tones. I think most of the batiks found on the market these days are made with too many bright colors. I admire dull colors, which tells about my simple, easy, and free character. I also enjoy mixing colors and creating my own tones. Sketching with a pencil releases my mood, my feelings, and my thoughts on the cloth. This craft is my pride and my life and I think I have found my way. My dream is to see my works displayed in the decoration magazines. Yes, that's it, my works would hang on somebody's walls, somebody who loves my batik and bought it because it appeared in the magazines. I presently employ one worker who lives near my house and to whom I taught the process. But I would also like to have a little workshop where I would work and hire people who want to learn and work with me. That's what I would like to do."
View all