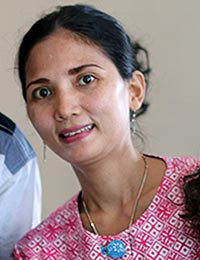 Silk batik shawls and scarves in Bali and Java

"My mother is my inspiration. She and I still design together, especially the floral and bird motifs that are typical in Pekalongan batik.”

“My name is Yuni Kristina and I was born in 1983 in Wonokerto, Pekalongan, Central Java. As part of Pekalongan regency, which is known as the ‘World’s City of Batik’, people in Wonokerto are also producing batik. Most housewives in Wonokerto are making batik, from small productions to large ones. There are stamp batiks and handmade batiks; all are available. Besides being known as ‘Batik City’, Pekalongan is also known as ‘Fisherman City’. Most of the men work as fishermen. My father also worked as a fisherman and my mother as a batik maker. As a fisherman my father could be gone anywhere from a month to six months; it all depended on how much fish he could catch.

“I started working in this field when I was 16 years old. After school I helped my mother in making batik. My mother taught me how to hold the canting, and how to draw on cotton or silk. I love making batik because batik has so many motifs that can be explored. To make batik one also needs patience and extraordinary skill.

“Even though now my life seems good and I can provide for my children, I used to work very hard when I was a teenager. When I graduated from senior high school, I had to work in two places. From 8am-4pm I worked for a phone seller, and after that from 4.30pm – 9.30pm I worked at a motorcycle counter in some mall. I did that for 6 years. I did that because I needed to support my father, since he was very sick at that time.

“Now, I am married to my lovely husband named Pande Putu Riecky Surya, and together we are blessed with a daughter and two sons. Our children are the best thing that ever happened to me. And they give us new spirit to work harder. My husband and I always give our best to give them a great education, so they can have a bright future. We hope that they can be humble people, and they can make a good impact for society.

“When I had just started my batik business, a lot of people underestimated my skill in making batik. Yet, by the time I could prove they were wrong, people started to recognize my business. I have made a lot of batik scarves and shawls, but my best and challenging one is the ‘Wine Garden’ shawl. The reason is because it uses two methods to make it beautiful. First, I do batik on silk, and then I draw flowers so the product is really colorful. The silk and cotton on my scarves are usually ones that I have picked. Then I give them to my helpers; I have 20 helpers, six men and fourteen women. My husband and I are the ones who coordinate them all. I am really proud to be a batik maker because I am also preserving my heritage, especially now that batik is known as original to Indonesia.

“I joined NOVICA in 2008; my husband was the one who brought our batik to NOVICA. And thankfully they accepted us and even helped us a lot. NOVICA has taught me to be really careful in making sure of the quality of my scarves and shawls. They have also taught me to be creative; as they demand new designs regularly. And big thanks to NOVICA, who gave us microcredit so I could expand my business. Since I joined NOVICA, now I own a house and two shops to sell my batik scarves. I even own a car and a motorcycle, and now I can support my children with the best education.”

"I learned the art of batik when I was very young, since my mother is a batik artist in Java. She has been making batik at home for 23 years, while waiting each day for my father – a fisherman – to come home from the sea. As you can imagine, batik is a part of my life. I started experimenting with the technique when I was 13 years old, with mori textiles. Now I've learned to create different motifs and to work with other materials, such as silk. My mother still helps me a lot.

"My mother is my inspiration. She and I still design together, especially the floral and bird motifs that are typical in Pekalongan batik. My husband Rieckey also helps me a lot because he knows what people like abroad, and then I can focus on creating. I would like the batik of Bali to become well known around the world, since its beauty is outstanding."

Both scarves are lovely. Unique and beautiful.

The Java Starlight shawl in silk is just gorgeous! It is a feast for the eyes with the deep blues and intricate design. Made in a soft, luxurious silk, it truly dazzles. It is at least as beautiful as the picture shows it and everything I had hoped it would be. Many thanks for this amazing piece of art. I will wear it often!

Loved the shawl!Outstanding quality and attention to detail. Colors are beautiful and vibrant without being too ""loud"". Packaging was equally beautiful and actually can be used for storing the shawl.